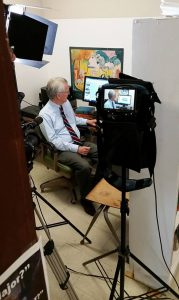 UA associate professor emeritus Dr. Robert O. Mellown was recently taped in an interview about the historic capital in Tuscaloosa for a special Bicentennial episode of the Emmy-winning series, Discovering Alabama, Discovering Alabama: State Capitals, which will be broadcast on October 8 and October 12, 2017, on Alabama Public Television. The episode will explore the histories and the mysteries of the state’s five capitals as told through archaeology and ghost stories, facts and folklore, and through written records and off-the-record legends. Mellown, who specializes in the historical architecture of Tuscaloosa and The University of Alabama, is an expert on the history of Tuscaloosa, which was Alabama’s state capital from 1826 until 1846, and he was a major source for the section.

Left: Dr. Robert Mellown during an interview for Discovering Alabama’s Bicentennial special on our state capitals.