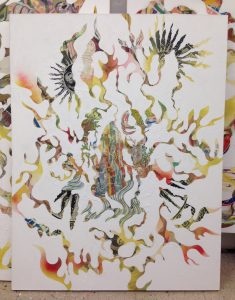 As part of UA graduate student Turner Williams’ MFA thesis exhibition in studio art, April 18-May 3, several visiting artists and musicians will perform April 20-28, April 30 and May 1 in the Sella-Granata Art Gallery in Woods Hall on UA campus. Williams’ thesis exhibition includes almost daily performances of his own and other performance artists in the gallery (see schedule below). They run from April 20 through April 28 and again on April 30 and May 1, often at 6:00 p.m. Internationally noted improvisational artists LaDonna Smith and Davey Williams will be among the musicians performing.

Turner Williams’ statement about his work:

My work is about the interpenetration of opposites, creative confusion, and the surprising order inherent in chaos. These performances present a body of work that is an antipode to my flat, static paintings. Relief wall sculpture will be processed and projected back onto itself by video feedback loops, echoing the process informs my painting. Projectors receive a live feed from video cameras. When the camera input is centered on the projectors output, the image erupts, multiplies and destabilizes. I will deploy this phenomenon as a visual instrument in love improvisation with a host of guest musicians. With the gallery lights dimmed, we will perform duets, unraveling my painting process into a confused dance of light, sound and movement.

Gerard Assayag is head of the Music Representation Research Group at IRCAM (Institut de Recherche et Coordination Acoustique/Musique (IRCAM)) in Paris and head of the STMS (Sciences and Technologies of Music and Sound) at the IRCAM/CNRS lab. With Carlos Agon, Assayag created the OpenMusic environment which is currently the standard for computational composition and musicology. With colleagues, he created the OMax computational improvisation system based on machine listening and machine learning and has become a widely recognized reference in the field.

Brad Davis is a musician working with percussion and electronics. He has a special interest in experimental music and improvisation, particularly the use of chaos and feedback in electronic circuits. In the improv scene, he has worked with LaDonna Smith, Tatsuya Nakatani, Andrew Raffo Dewar, Arthur Doyle, and others.

Andrew Raffo Dewar is a composer and soprano saxophonist whose work has been performed throughout North America, Southeast Asia and Europe. He is an Associate Professor in New College and the School of Music at the University of Alabama.

William T. Dooley is associate professor of art and director of the Sarah Moody Gallery of Art at The University of Alabama.

Holland Hopson is a composer, improviser, and electronic artist. As an instrumentalist he performs on clawhammer banjo, soprano saxophone and electronics. Holland often augments his instruments with custom-designed sensor interfaces and performs with his own highly responsive, interactive computer programs. Hopson is an instructor in New College at The University of Alabama.

Jasper Lee is a mixed-media artist and composer from central Alabama. His work encompasses installation, sculpture, sound and video. He has recorded scores for several feature films and has performed nationally, including appearances at Bard College, The University of Alabama’s Sonic Frontiers Concert Series, the Improvisor Festival, the Shreveport New Music Festival, the International Noise Conference and San Francisco’s Asian Art Museum.

Rodger Stella is a noise artist who is known for his work with the Pennsylvania noise groups Macronympha and O.V.M.N., as well as the more recent Birmingham, Alabama, duo Hollow Bush.

Shea Stevenson is a musician, instrument builder and farmer from Nectar, Ala. He organizes a monthly experimental concert series at the Spring Street Firehouse in the Avondale neighborhood of Birmingham and performs his own exploratory sounds nationally.

Birmingham native Turner Williams earned a BFA in drawing and printmaking from the Sam Fox School of Design and Visual Arts of Washington University in St. Louis in 2008. He exhibited at Kerry Schuss & Mountainfold in New York City and Secret Project Robot in Brooklyn, N.Y. His work is on permanent public display at the Birmingham Southern Ecoscape project in Tarrant, Ala.

Magicicada is Christopher White, an Atlanta musician and artist who creates mystical sound collages and evocative, organic drones from a arsenal of folk instruments, found objects, samplers and field recordings.

These performances are thanks to generous support from The University of Alabama’s Department of Art and Art History painting and digital media areas.